This post may have affiliate links to products that may earn us commissions at no added cost to you.

Okay, let’s get this out before we even get going – I have so many issues with the photo I picked for this article. She’s exhibiting terrible trigger control, she’s got her belly bare and she looks like she’s dressed like a hippy. But, I couldn’t find a better image in my circle of friends of pregnant women holding a gun – my wife is long past pregnancy photos! Okay, with that out of the way, let’s try and answer the question: Can you shoot a gun while pregnant?

The short answer is yes. Yes, you can shoot a gun while pregnant. However, the longer answer is much more nuanced than that. There are some things that should cause you to think about whether or not you WANT to shoot a gun while pregnant. From potential discomfort to you or the baby to the potential for chemical poisoning. There are some things to consider. Let’s talk about them.

While there is some disagreement and lack of consensus around whether or not shooting a gun can be harmful to your baby, it seems that there are some good reasons to avoid it.

If going to the shooting range is your way of getting rid of stress, or if you just enjoy the hobby, then it might not be easy to give up. However, as a good mother, you probably don’t want to harm your developing baby.

However, if you’re expecting, you know there are several things you’ll have to stop doing to maintain your baby’s well-being. But is shooting a gun one of them?

In this article, we’ll answer a question that has been up for debate for a long time. Can you shoot a gun while pregnant?

There are two reasons why some doctors argue against shooting a gun while pregnant.

While both of these can be mitigated for the shooter (soon-to-be mother), the baby doesn’t have great protection against them and it is proven that lead can harm a developing baby quite a bit.

When you fire a gun, lead particles are shot into the air. As a result, they can land on your hands or you can inhale them if you aren’t wearing a face mask.

Lead is a harmful substance to everyone everywhere, not only when they shoot guns. This is why more and more manufacturers try their best not to include it in their products.

Lead can cause many health issues if inhaled, swallowed, or absorbed in any other way. These issues might include fatigue, headaches, loss of appetite, and more if there has been a short-term lead overexposure.

You must know how much noise a fired shot could make. This is why shooters come equipped with ear protection.

While a mother-to-be might have ear protection, her developing baby doesn’t. However, her muscle structure and the organs that surround her fetus can work as a natural guard against sound.

This way, by the time that the loud noise reaches her fetus, it should be muffled enough not to cause a problem.

Despite that, long periods of loud noise exposure can have a negative impact on the baby’s development.

Now that you know the potential risks of shooting a gun, you might want to think twice before hitting the shooting range.

Is It Safe to Go to a Shooting Range While Pregnant?

Say you’ve decided to pause your shooting practice until your delivery. Can you go to a shooting range even if you don’t shoot?

The answer is, like other answers for this subject, complicated. Technically you can go to the range and shoot when you’re pregnant for most ranges, but there are some ranges where you’re not allowed to shoot if you’re pregnant.

But if you want to go to the range anyway, make sure you take safety measures to reduce exposure to toxic elements.

There are several points you should know about before you decide to go back to the shooting range.

The Impact of Lead on Pregnant Women

As we mentioned before, using a gun can lead to the inhalation or absorption of toxic substances. This can cause health issues to any person who spends most of their time at the shooting range.

Aside from that, lead overexposure can be more troubling for pregnant women. It can impact the baby’s brain development or its birth weight.

Also, lead exposure during pregnancy can cause other health risks that all pregnant women should keep in mind. It can lead to weight loss, fatigue, or even miscarriage in the case of heavy overexposure.

Apart from lead, other heavy metals are released when a shot is fired. For example, these include boron, antimony, and manganese.

These metals can be harmful, too, although no research has been conducted yet about their effects on pregnant women.

As time passes, it might be more difficult for a pregnant woman to carry a gun the proper way. This is because her body releases hormones to help the joints relax the closer that she approaches the delivery time.

Having relaxed joints might not be the best option when it comes to holding or shooting a gun.

At What Point in Pregnancy Should You Not Shoot Guns?

It’s pretty clear by now why it’s best for a pregnant woman not to use a gun. There are a lot of things to consider regarding the health of your developing baby and there are still some unanswered questions. Like is there a point when you should stop completely? How long can you shoot a gun while pregnant?

Ultimately, it’s your choice. You might not want to lose the shooting skills that you’ve gained during practice.

In that case, you can still go shoot guns every now and then until you hit 13 weeks of pregnancy.

Wondering why? It’s because, in the first trimester, your body doesn’t change as much as it would later on. At least, not in a way that can interfere with shooting a gun.

Additionally, the baby’s ears will develop at around 13-15 weeks of pregnancy. At that point hearing damage is possible.

You can easily carry and shoot a gun while sticking to some tips to reduce lead exposure and noise exposure.

Tips for Shooting a Gun While Pregnant

If you’re an officer, you can’t just stop using guns. There are several ways to ensure that you keep up with your training and stay healthy.

Other Ways to Practice

You can also practice without directly shooting a gun. It’s all about keeping your muscle memory intact without exposing yourself to a shooting range.

First of all, you can use dry-fire practice. It can give you the chance to train important skills that you don’t want to fade away without exposing yourself to lead particles.

In addition, you can practice drawing and holstering your unloaded gun.

Lastly, you might prefer using an airsoft gun or a realistic air gun (bb gun/CO2 Gun) – which don’t use lead ammunition and produce almost no noise. It’s another great way to keep your shooting skills intact while maintaining your well-being.

In the near future, we’ll do an entire series of articles about practice and proficiency with your firearms – where we’ll tackle some “dry fire practice” tips, tricks and tools. There’s dummy ammo, laser ammo and laser practice guns which all make it so you can eliminate the excuse of “needing practice”. 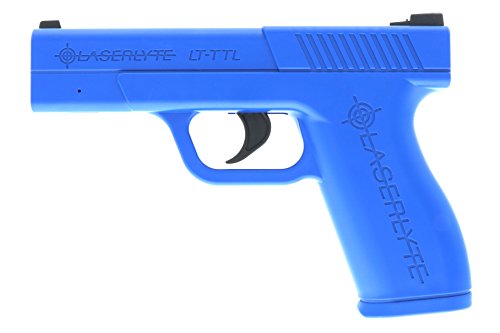 Check Price on Amazon
Learn More
If you click this link and make a purchase, we may earn a commission at no additional cost to you.

It’s so interesting to write about this topic from the perspective of a man. Before I came across this question I wouldn’t have thought of asking whether or not you can shoot a gun while pregnant. It didn’t cross my mind but I now know more about this topic than I probably ever wanted to know!

My sister, who was a Marine, just gave birth to my beautiful little nephew. She made a passing comment about not shooting her guns while pregnant and that’s what spurred this article. She chose not to do it.

All of that being said, you should make your choice depending on what suits you best.

However, make sure you pay your doctor a visit for advice. After all, the most important thing during pregnancy is to keep your body healthy to keep yourself and little one safe.